After three very successful weeks of the Kubrick exhibition at the ¬ Martin-Gropius-Bau Berlin will stand even more under the sign of the great director: due to the cooperation with the ¬ Berlin Film Festival (Berlinale) and the ¬ Filmmuseum Berlin there will be a series of events and lectures and  most importantly  yet another opportunity to see Kubrick's films in the theaters. The retrospective of the 55th International Film Festival (10 through 20 February 2005) is devoted to the general theme production design and will present various relating films. However, a special focus will be on Stanley Kubrick. His complete oeuvre is going to be integrated into the respective categories of the program: "Interiors" (LOLITA, EYES WIDE SHUT), "Transit" (THE KILLING), "Power" (SPARTACUS, DR. STRANGELOVE, FULL METAL JACKET), "Stage" (A CLOCKWORK ORANGE, BARRY LYNDON), and "Labyrinths" (KILLER'S KISS, PATHS OF GLORY, THE SHINING). 2001: A SPACE ODYSSEY is shown as special screening in 70mm.

The accompanying exhibition Moving SpacesProduction Design and Film at the Filmmuseum Berlin will open the night before the start of the Berlinale and will present, in cooperation with Deutsches Filmmuseum Frankfurt am Main, some exhibits from the Kubrick Estate. Accordingly we are dedicating the current issue of the Kubrick newsletter to the aspect of production design. Even though all components in Kubrick's films  from cinematography to montage and music  are of equal importance, the director has always been said to have had a special relation to architecture and set design. Kubrick and his production designers created worlds obsessed with detail and authenticity, yet at the same time they were fantastic and visionary and as such have entered film history.

1. This Month's Object: the Dijnn chairs 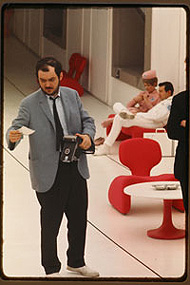 Kubrick undertook the probably most elaborate efforts regarding the film set with 2001: A SPACE ODYSSEY. Three names are linked to its production design: Antony Masters, Harry Lange, and Ernest Archer. Moreover, in the four year long production period Kubrick employed a sizeable art department and countless specialists. From scientists and product developers of corporations he took advice as to how the world might look in 2001 (for comprehensive accounts see two essays in our ¬ exhibition catalogue: "Designing the future" by Volker Fischer and "Branding 2001" by Bernd Eichhorn). In the process elements of progressive contemporary design were adapted and projected into the future. Excellent examples are the Djinn chairs. Today they constitute a still fashionable classic of design history. The functional, yet playful series of chairs made of tubular steel covered with foam padding was designed in 1965 by Olivier Mourgue and derives its name from servile ghosts in Arabic mythology who could take on human or animal shape. In their softly curved, biomorphic forms the chairs are indeed reminiscent of live creatures and at the time they came to represent a new futuristic look.
(Photo: Kubrick with his Polaroid on the set of 2001: A SPACE ODYSSEY)

In 2001: A SPACE ODYSSEY they dominate the set in the lounge of Space Station Five where Dr. Floyd, on his way to the moon, meets with several other space passengers. The original film props have not survived, but some collector's pieces exist today. Thanks to a loan from the ¬ POPDOM Collection Siekmann in Cologne the Kubrick exhibition can present two Djinn chairs (one of them a double seater). These chairs, which were originally covered with a green-brownish fabric, were fitted with new covers especially for the exhibition. The choice of a new fabric presented a great challenge because the original color varied strongly depending on the light. While in Kubrick's film the chairs appear almost red, they actually had a slightly magenta tonality. The collector Dennis Gilliam, also a lender to the exhibition area devoted to 2001: A SPACE ODYSSEY, reports on similar problems in the restoration of his chairs: see his ¬ website with many images.

In the almost fifty years that Kubrick spent on making his films he hired many different people to be in charge of production design. The set of his early film THE KILLING was designed by his first wife, the dancer Ruth Sobotka, who frequented avant-garde art circles. For the following ten films Kubrick often changed his production designers, sometimes working with them on one project only. Of prominence is his cooperation with John Barry, who was initially engaged for the Napoleon project, but then took over A CLOCKWORK ORANGE. The designer who was later going to work on STAR WARS (1977) and SUPERMAN (1978) (and who should not be confused with the famous film composer) was at that time relatively unknown. For the adaptation of Burgess' novel Barry and Kubrick consulted volumes of architecture magazines. Barry's shrill-bizarre interiors constitute a crucial element in the lasting effect of A CLOCKWORK ORANGE. After that Kubrick worked on several projects with Roy Walker and Les Tomkins. Initially Walker collaborated as art director on BARRY LYNDON and as production designer created the labyrinthine world of the hotel in THE SHINING. Les Tomkins was art director on THE SHINING and FULL METAL JACKET and eventually took on, along with Walker, the production design for Kubrick's last film, EYES WIDE SHUT.

The probably most well-known and intensive collaboration developed between Kubrick and Ken Adam, whom we will look at more closely now after various mentions in past newsletters. From the beginning he is linked to the Kubrick exhibition (in 2002 within the context of the exhibition Visionary film worlds  Dr. Strangelove, Goldfinger, and other film sets at Deutsches Filmmuseum in Frankfurt am Main curator Hans-Peter Reichmann met Christiane Kubrick and Jan Harlan who attended the showing of DR. STRANGELOVE). The legendary British film architect, born Klaus Hugo Adam in Berlin in 1921, had escaped the Nazis in 1934 at age thirteen and fled to London with his family. During WW II he served as the only German born pilot in the Royal Air Force. At the Bartlett School he studied architecture. From his German background he preserved his predilection for the Expressionism of the Weimar era. He started working in film initially as a draftsman and Art Director for productions such as AROUND THE WORLD IN 80 DAYS (1956). As production designer her achieved fame especially with his creations for seven Bond films, among them DR. NO (1962), GOLDFINGER (1964), THE SPY WHO LOVED ME (1977), and MOONRAKER (1979).

For Stanley Kubrick he created the grotesque topography of DR. STRANGELOVE OR: HOW I LEARNED TO STOP WORRYING AND LOVE THE BOMB. Another collaboration came about with BARRY LYNDON, which was preceded by the most intense research on the 18th century. For this film Adam received an Academy Award (a second in 1994 for THE MADNESS OF KING GEORGE, another history film). In 2001 he was knighted by the Queen and since then is properly called "Sir Kenneth Adam". With his wife Letizia he lives in London, but visits Berlin often and has been a frequent guest especially in recent years at the Berlin Film Festival. At the first two Talent Campus events in 2003 and in 2004 he served as mentor and this year because of the festival's theme production design he will of course be present (Ken Adam: Film Sets are Forever. Haus der Kulturen der Welt, 14 February, 5p.m.). You can find another two essays on his production design in our exhibition catalogue: Boris Hars-Tschachotin's text on "Superpower paranoia expressed in space" dealing with the design of the War Room and an interview with Ken Adam about DR. STRANGELOVE and BARRY LYNDON, excerpts of which you may read on our website.
(Photo: Sketch for the war room, © Ken Adam)

3. Dates and places around the Berlin Film Festival

We would like to provide you with a brief synopsis of the film and event program on Stanley Kubrick. We have also compiled all relevant dates and addresses in a ¬ pdf-file.

The exhibition Stanley Kubrick at the ¬ Martin-Gropius-Bau has special and extended opening hours during the Berlinale and will remain open daily from 10a.m. through 9p.m. At 5p.m. every day there will be showing of Jan Harlan's STANLEY KUBRICK: A LIFE IN PICTURES at the MGB's movie theater.

Kubrick's films can be seen during the ¬ Berlinale from 10 through 20 February at CinemaxX and at the Zeughauskino. A showing of 2001: A SPACE ODYSSEY will take place at the Urania. After the Festival closes the Zeughauskino will show all films again through 6 March and will also show Jan Harlan's STANLEY KUBRICK: A LIFE IN PICTURES.

The exhibition Moving SpacesProduction Design and Film at the ¬ Filmmuseum Berlin will open on 9 February at 7p.m. and will be on through 19 June.

We would like to recommend to you two events albeit they are overlapping: On 16 February at the ¬ Urania at 5:30p.m. our catalogue contributors Eva-Maria Magel and Ronny Loewy are going to present two projects of Kubrick's that were never realized, "Aryan Papers" and "Napoleon". At another event titled "Stanley Kubrick: Creating a World" Christiane Kubrick and Jan Harlan are going to meet French film critic Michel Ciment at the ¬ Filmmuseum Berlin at 6.p.m. Ciment already attended last year's Kubrick symposium at the Deutsche Filmmuseum in Frankfurt am Main.

Three weeks after the Berlin Film Festival, on 5 March from 2 through 6p.m., the workshop "Moving SpacesAspects of the Labyrinthine" will take place in connection with the two exhibitions and in cooperation with the ¬ Einstein Forum. Participants are going to be, among others, Jan Harlan, set designer Alex McDowell, and the theater studies expert Hans-Thies Lehmann (see his exhibition catalogue essay on EYES WIDE SHUT).

We are pleased to announce a media-cooperation: The Berlin ¬ Yorck movie theaters will present, in the course of the next weeks, in several important theaters (International, Filmtheater am Friedrichshain, Capitol Dahlem, Yorck New Yorck, Babylon, and Odeon) a trailer for the Kubrick exhibition produced by Bibo TV.

On the day before the start of the Berlin Film Festival German TV star Anke Engelke will report live from the Kubrick exhibition in ¬ ARD Morgenmagazin. Between 11 and 18 February some of Kubrick's films are going to be aired on ¬ RBB and ¬ 3sat; ¬ ZDF will air 2001: A SPACE ODYSSEY on 5 March.