The exhibition STANLEY KUBRICK at Frankfurt closes its doors on 4 July. More than 40.000 visitors have seen it so far. Because of high visitor numbers starting 24 June opening hours will be extended until 8p.m. The exhibition is likely to travel to Berlin in 2005.

Along with the exhibition and the film series this newsletter will cease to exist. In thispossibly lastedition we would like, once again, to present "This month's object" and a "brief portrait". We are focusing here on the film that we also chose for our finissage: BARRY LYNDON. It was Kubrick's only great commercial failure, yet some think this 18th century dramain terms of beauty, grace, and perfectionis an equal to his futurist vision 2001: A SPACE ODYSSEY; some even think it better. BARRY LYNDON with its unmatched, true-to-detail, and mysteriously removed pictures of a long gone period will remain a timeless testament to Kubrick's artistic mastery.

Above all it is the light that made BARRY LYNDON famous: the light of its interiors that stems from hundreds of candles, sometimes from only a few. Back then no lens was strong enough for such sequences without the support of artificial light. As early as 1968 Kubrick had run first tests with especially light-sensitive film material but the results could not satisfy him. During the preparations for BARRY LYNDON Kubrick found out about a special lens that Carl Zeiss Oberkochen had developed for NASA's space photographs. This lens with 1:0,7 and a focal length of 50mm was two f-stops faster than all other film lenses at that time. Kubrick had camera specialist Ed DiGiulio integrate it into an old Mitchell BNC which had to be completely remodeled to accommodate the large lens. This enabled cameraman John Alcott to film interiors with available light but it also held a directorial challenge: The much interpreted artificiality and hypnotic slowness of the protagonists is partly due to the technical requirements of filming: actors had to pay attention to not move too fast thereby leaving the extremely limited depth of focus. 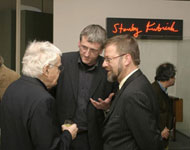 Beside the interior scenes it is the painterly landscape images that constitute the visual highlights of BARRY LYNDON. Some of these pictures were taken in Germany where Kubrick worked with Jan Schlubach, one of the most important German stage designers and film architects. Next to production designer Ken Adam he is responsible for some of the most beautiful motifs in Kubrick's film. He supervised the famous establishing shot at Neues Palais in Potsdam, which was taken in the former GDR under difficult circumstances and included large numbers of actors and horse carriages.

Schlubach also selected shooting locations in Southern Germany, among them Hohenzollern Castle at Hechingen. During the location scouting many photographs were taken and affixed with various comments, drawings, and possible compositions of frames. Schlubach once again went on location scouting for Kubrick's THE SHINING, this time in Switzerland and in the U.S. and crossing snowy mountains with helicopters and skis. The now eighty-three year-old, who received the Deutsche Filmpreis in 1980, is still working for various theater and film productions. There is a special link between Schlubach and Deutsches Filmmuseum (which just celebrated its 20th anniversary): He then was the interior decorator of the building, which opened in 1984 and he designed most of the permanent exhibition on film history.

Photo: Jan Schlubach with Hans-Peter Reichmann and the Frankfurt Deputy of Culture, Dr. Hans-Bernhard Nordhoff at the opening of the exhibition.

On Saturday 26 June starting at 8p.m. and on Sunday 27 June from 10a.m. until 6p.m. the symposium "Envisioning Kubrick" will be held in the auditorium of Deutsches Architekturmuseum and in the cinema of Deutsches Filmmuseum. Lecturers come from different disciplines, such as art history, architecture, and photography. Special guests are Michel Ciment and Kubrick's longtime executive producer, Jan Harlan, who will participate in the final discussion. Confirmed reservations are no longer accepted, but tickets can still be purchased at the front desk of Deutsches Filmmuseum. The fee is  29 (student rate 19) which includes admission to the exhibition and to one of the films FULL METAL JACKET and EYES WIDE SHUT to be shown on 26 and 27 of June.

On the Sunday thereafter, on 4 July, at 7p.m., as part of the finissage there will be another lecture entitled "Hearing Kubrick" meant to open a special perspective on Kubrick's not merely visual work: Composer Bernd Schultheis who designed the audio stations in the exhibition will discuss the important and complex role of music in Kubrick's films.

The Stanley Kubrick film programme will end chronologically the night before with A.I. ARTIFICIAL INTELLIGENCE, which Steven Spielberg realized after Kubrick's death. In the late show on 3 July you will once again have the opportunity to watch 2001: A SPACE ODYSSEY. The film programme in conjunction with the finissage on 4 July at 6p.m. offers a look back at Kubrick's films with a synopsis of all trailers and the documentary 2001: A SPACE ODYSSEY- A LOOK BEHIND THE FUTURE. The final film at 9p.m. will be BARRY LYNDON.

Another tip: the museums will be closing the Kubrick exhibition, but you will be able to catch glimpses here on our website of the exhibition rooms that are shortly to be disassembled. There are pictures from the various exhibition spaces and also from the exhibition opening.

¬ Photo Selection from the exhibition