This is the last newsletter before the exhibition Stanley Kubrick opens on 30 March 2004. This edition is meant to give an overview of the exhibition itself and of the events taking place around its opening. Since the newsletter's first edition in October 2003 many people have joined us as readers and subscribers of the newsletter. We are looking forward to welcoming you all soon as visitors to Deutsches Filmmuseum and Deutsches Architektur Museum!

1. Work in Progress  Installation of the Exhibition

The installation of the exhibition is in full swing. In both museums floors are laid out and walls are being painted, beamers hooked up, and pedestals assembled, cases are being built, and photographs hung. Images and documents from the Estate have gone through the final selection process and are now integrated along with new and historical models into the spatial installations. The exhibition labels are laid out according to a color scheme that is meant to facilitate orientation in the large exhibition. Visitors will receive an audio-guide giving extensive information on Kubrick's films and individual objects in the exhibition, as well as a short printed guide with floor plans of the three exhibition levels.

Right at the entrance twelve monitors with highlights from Kubrick's films welcome visitors to the exhibition. Fifteen more monitors are installed throughout the exhibition showing longer sequences from films and presenting commentary from contemporaries. The selection of scenes is meant to recapitulate the film plots and to highlight recurring motifs. Above all, they should do one thing: make visitors want to go and see these films again. The film series (showing the films on partly newly drawn copies) in conjunction with the exhibition will provide ample opportunity to do so. 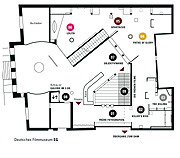 The tour through the exhibition starts on the ground floor of Deutsches Filmmuseum (for details click on the plans). Here a selection of Kubrick's photographs from the Library of Congress is on display. Kubrick had taken them for Look Magazine where he was the youngest staff photographer. The tour leads from his first three documentary films, to his first feature film FEAR AND DESIRE, his two films noirs KILLER'S KISS and THE KILLING, his breakthrough film PATHS OF GLORY, his "commissioned work" SPARTACUS, and eventually to the Nabokov-adaptation LOLITA, which marked a biographical break: Kubrick's decision to become artistically independent and to move from the USA to England.

From here the tour continues at Deutsches Architektur Museum. For the duration of this exhibition the connecting door between the two museums will remain open. Outside, a new model of the monolith from 2001: A SPACE ODYSSEY stands as the connecting link between the two buildings. In the Architektur Museum Kubrick's subsequent films up to his "legacy" EYES WIDE SHUT are presented on two floors: the two war films DR. STRANGELOVE and FULL METAL JACKET, the costume epic BARRY LYNDON, and the horror thriller THE SHINING;

on the upper floor Kubrick's probably most famous films, A CLOCKWORK ORANGE and 2001: A SPACE ODYSSEY. For the latter the inside of computer HAL was rebuilt as a "dimensionless" room. The two unrealized projects Aryan Papers and Napoleon will be extensively documented for the first time with material from the Estate. The project, A.I., that Kubrick had started and that after his death was continued by Steven Spielberg is going to be represented through imaginative sketches by Chris Baker. An audio room with Kubrick's soundtracks and a digital picture show on Kubrick's biography constitute two quiet zones in the exhibition. The first conveys in an audio-visual presentation the characteristic handling of music in Kubrick's films; the latter documents in hitherto unpublished pictures stations in the director's life.

The exhibition gives special emphasis to Kubrick's innovative use of technical equipment. Devices like the steadicam and procedures like slitscan are explained in texts and by models. A selection of Kubrick's extensive collection of apparatus have come from England to Frankfurt and are now being prepared for the exhibition with the help of camera expert Joe Dunton who worked closely with Kubrick. Among these objects are several lenses, not least of all the legendary Zeiss f.07 that NASA had developed for space. Kubrick had it built into a BNC camera in order to shoot the candlelight scenes in BARRY LYNDON. Another item in the collection is the complete chassis of a Citroen 2CV that Kubrick had rebuilt into a camera dolly because the carthat attained fame in Europe as the 'duck'has a special spring-suspension evening out bumps in the ground. Kubrick made use of this advantage in his films. The large vehicleloaded with film camerascan be admired in the foyer of the Filmmuseum's movie theater.

A special place in the exhibition is devoted to the front projection rig, which is set up in the second floor gallery of the Filmmuseum. Front projection was used in the prologue The Dawn of Man of 2001: A SPACE ODYSSEY providing the effect of on-location shots within a studio. The actors playing prehistoric men moved in front of a highly reflecting screen on which landscape slides were projected with the help of a mirror. Joe Dunton for the first time reconstructs the front projection with the original measurements so as to reproduce the effects in the film.

On 29 March there will be a preview for invited guests followed by a press conference on the next morning. The exhibition will with a party open on 30 March at 7p.m. On a stretch of the Main River in front of the two museums, the boat "Nautilus" will anchor. On it the exhibition will officially be opened by Frankfurt's Deputy of Culture, Dr. Hans-Bernhard Nordhoff and in the presence of Christiane Kubrick and Jan Harlan. Beside members of the Kubrick and Harlan families other guests include people who used to work with Kubrick, such as Sir Kenneth Adam, Jan Schlubach. To enter the boat "Nautilus", a special invitation card is needed, yet the exhibition itself is free to everyone: You are welcome to walk through both museums and to explore the exhibition. In the movie theater of the Filmmuseum Kubrick's very first short film DAY OF THE FIGHT will be shown every half hour. In the foyer the Big Band of Frankfurt's University for Music and Performing Arts will play.

On 31 March, the first day of the exhibition, a discussion with Christiane Kubrick and Jan Harlan will take place in the "Café Kino" of Deutsches Filmmuseum in cooperation with Hessischer Rundfunk / "hauptsache kultur!". Before that, at 6p.m., there will be an opportunity to watch Jan Harlan's documentary STANLEY KUBRICK - A LIFE IN PICTURES in the movie theater of Filmmuseum.

The Luminale Light Festival (18 through 22 April), taking place during the Frankfurt venue of the exhibition, will honor Kubrick as a master of light. Lange Nacht der Museen (24 April) and the 20th Anniversary of Deutsches Filmmuseum (10 June) are other events to concur with the exhibition. On the occasion of the latter event there will be an open-air screening of 2001: A SPACE ODYSSEY on the banks of the Main river. You will find updates on these events on our website.

From March to July 2004 the Kino of Deutsches Filmmuseum is showing ¬ all available films of Stanley Kubrick in their original versions, partly with new prints. Documentaries about Kubrick's work, reference films, related films of specific genres, Kubrick-Nights and other events such as 70mm screenings of 2001: A SPACE ODYSSEY and SPARTACUS, complete the program. As a special offer to visitors of the exhibition, we will be screening a Kubrick film every Saturday afternoon in chronological order. In addition to that, the Eldorado-cinema in Frankfurt and the Caligari-Filmbühne in Wiesbaden will show German versions of some of Kubrick´s films in cooperation with Deutsches Filmmuseum.